The “Mayflower” in Rotherhithe, east London is a classic British pub sited on the banks of the Thames. Its name commemorates the departure of the Mayflower from Rotherhithe in July 1620 (400 years ago this month, as it happens). The pub has this splendid sign, which I recognised instantly….

…the picture is identical to one in my “The Story of Ships: A Ladybird ‘Achievements’ Book’, which was published in 1961 and as a child, sparked my lifelong interest in ships.

But there’s a slight problem. The ship depicted on the pub sign is NOT the Mayflower….

…It’s Sir Francis Drake’s Golden Hind. The Story of Ships was written by Richard Bowood and illustrated by Robert Ayrton. “Richard Bowood” was a pseudonym used by author, historian and journalist David Scott Daniell (1906-1965) and Robert Ayton (1915–1985) was a British comics artist and illustrator who worked for the Eagle and Ladybird Books. As far as is known, he did not make pub signs. Presumably somebody copied the book illustration and hoped that nobody would realise that it was the wrong ship. In fact, the golden hind on the vessel’s stern is a slight hint. As for the book itself, from a modern perspective is is quite amusing to note Daniell’s outrage that the Spanish should regard English privateers like Drake as pirates. How dare they!

The current owners of the Mayflower pub have been in residence for ten years, and apparently the sign was already there when they took over.

As a regular pub-goer for many years I find it infuriating that all too often, my experience in a pub is ruined by music that is gradually increased in volume to a level that makes conversation all but impossible. Attempts to find a quieter spot are generally futile; loudspeakers are positioned to ensure that no place in the pub can escape the ghastly conversation-defeating THUD THUD THUD of the music, which itself is generally rubbish, utterly devoid of merit. I will generally be forced to move on and find somewhere quieter. In addition, there are many occasions where I enter a promising looking pub, only to turn round and walk straight out because of ridiculously loud music.

Please don’t misunderstand me, I have nothing against music in pubs, but its purpose should be background. I totally fail to understand how anybody can enjoy volume levels appropriate to a nightclub or trendy bar. The pubs I visit do not have a particularly young demographic and drinkers are of a wide age range, with many in their 40s to 60s. I would imagine that few, if any, feel that the music adds anything to their drinking/eating experience. Furthermore, in the past, when I have gone drinking with work colleagues, there were times when even the younger people in the gruup found the music to be objectionably loud. Finally, I would call upon the support of Sir Patrick Moore, who on the TV program “Room 101” a few years ago listed pubs that play loud music even before he got on to his well-known dislike of fox hunting.

I have heard two theories, neither of which shows publicans in a very favourable light. The first is that the bar staff do it for their own benefit, totally forgetting that it is people like me who ultimately pay their wages. The other is that it is a cynical and wholly-irresponsible ploy to boost sales on the basis that people respond to the stress the music causes by drinking more.

I can in fact refute the latter theory. At one now-embargoed pub in Highgate, I have seen the pub empty almost visibly as the volume is increased. So it is clear that in that case at least, the music is purely for the benefit of the bar staff.

We are often hearing about the decline of the British pub. In such circumstances, surely it is a massive own goal to alienate your customer base by foisting something on them that at best adds nothing and at worst unacceptably detracts from the pub experience. If all drinkers would follow my example of boycotting pubs where loud music is played, by forcing a change of policy it would in the long do the industry a huge favour.

Unfortunately the industry don’t seem care very much – I have emailed the British Beer and Pub Association about the issue, but nobody could be bothered to reply.

The Crown Tavern in Clerkenwell, formerly the Crown and Anchor, is popular with after-work drinkers for its wide range of beers and is generally very busy in the evening. The pub’s popularity goes back a long way, and it rumoured that Lenin met Stalin for a few beers there while the two future Communist leaders were in London, shortly before the abortive 1905 revolution in Russia.

While working on the socialist periodical Iskra (“the Spark”), which was for a time published in Clerkenwell, Lenin stayed at 16 Percy Square, about a mile away. 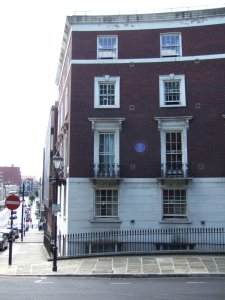 The original building has since been demolished, but an English Heritage blue plaque marks the spot. Shouldn’t it have been a red plaque in this instance?