It is fair to say that President Trump’s visit to Britain has not been universally popular, but it did provide a bonus to what has already been a bumper week for aviation enthusiasts following the RAF Centenary flypast on Tuesday.

The Bell Boeing V-22 Osprey is to date the only tiltrotor aircraft ever to enter production. A tiltrotor is an aircraft with ‘proprotors’ mounted in rotating wingtip nacelles. For takeoff, landing, hovering, and low-speed horizontal flight, these are angled vertically and serve as rotors, allowing the aircraft to operate like a helicopter. As the aircraft changes to horizontal flight, they gradually swivel forward to serve as propellers, and the aircraft operates like a fixed-wing aeroplane. Tiltrotors and their close relatives tiltwings (where the whole wing swivels) are and old idea, going back to the 1930s, but none have previously made it past the prototype stage.

The Osprey combines the VTOL capability of a helicopter with the long-range, high-speed cruise performance of a turboprop aircraft. It first flew in 1989, but did not enter service until 2007. It is operated by the US Air Force, Navy, and Marine Corps. To date, the only non-American operator is the Self Defence Force of Japan.

The Osprey is therefore an uncommon sight in Britain, but when a US President visits, aircraft of Marine Helicopter Squadron One (HMX-1) are deployed to the US airbase at RAF Mildenhall. HMX-1 is the USMC helicopter squadron responsible for the transportation of the POTUS and other VIPS. They use the MV-22B version of the Osprey.

Between the 9th and 13th of July, a flight of three Ospreys was repeatedly seen in the skies over London. They appear for the most part to have been operating in a mode intermediate between full helicopter and fixed-wing aircraft. 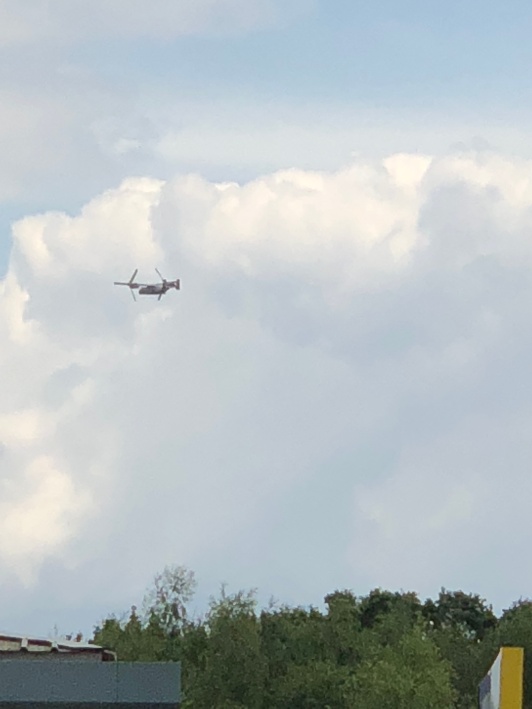 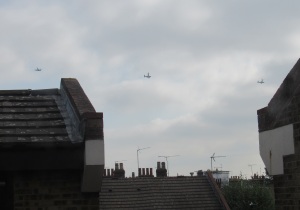 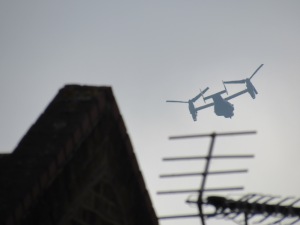 The Royal Air Force (RAF) was established as a independent armed service on 1 April 1918 as an amalgamation of the Army’s Royal Flying Corps (RFC) and the Royal Naval Air Service (RNAS). It is the oldest independent air force in the world. To mark the centenary, a flypast was staged over London on 10 July 2018, in which over a hundred aircraft of all types took part. An estimated 70,000 people crowded the Mall and Trafalgar Square to see the show, while the Queen and other members of the Royal Family watched from the balcony of Buckingham Palace.

First up was a wave of Chinook and Puma helicopters. The twin-rotor Boeing CH-47 Chinook first flew in 1961 and remains one of the most capable heavy-lift helicopters in service over half a century later. The Aérospatiale SA 330 Puma is another venerable workhorse, which first flew in 1965. Both types have seen action with innumerable operators and in innumerable theatres of combat. 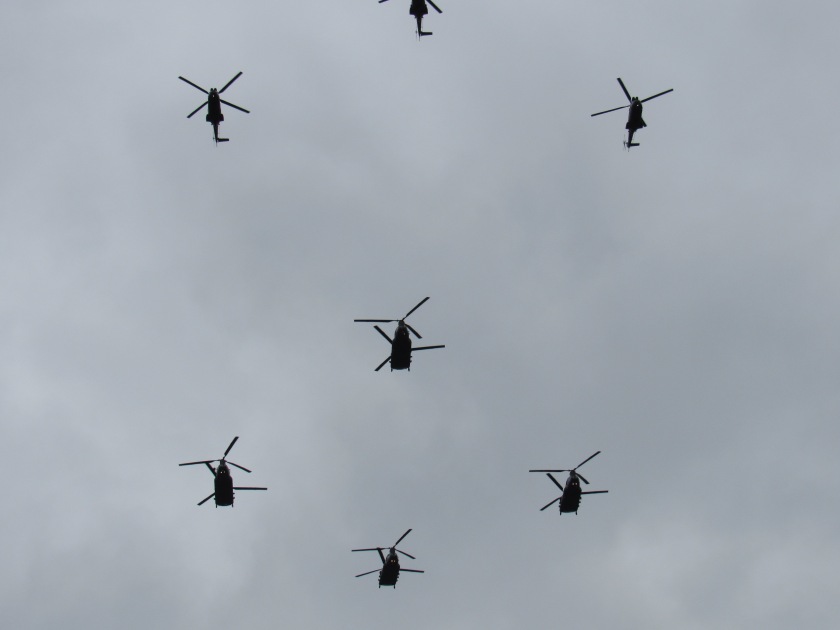 The Chinooks and Pumas were followed by two Juno H135s and a Jupiter H145. These are military versions of the Eurocopter EC135 and EC145 respectively. The civilian aircraft are widely used by police and emergency services. The RAF use them for training purposes.

The Douglas C-47 Dakota is one of the most successful aircraft of all time. A military derivative of the DC-3 airliner, it first flew in 1941 and saw extensive service with the Allies during WW II. Over 10,000 were built, many of which remain airworthy. This aircraft is part of the RAF’s Battle of Britain Memorial Flight, but as a multi-engine tail wheel aircraft it is also an important training asset for Lancaster aircrew and for Lancaster pilots maintaining their licences on aircraft of this type. 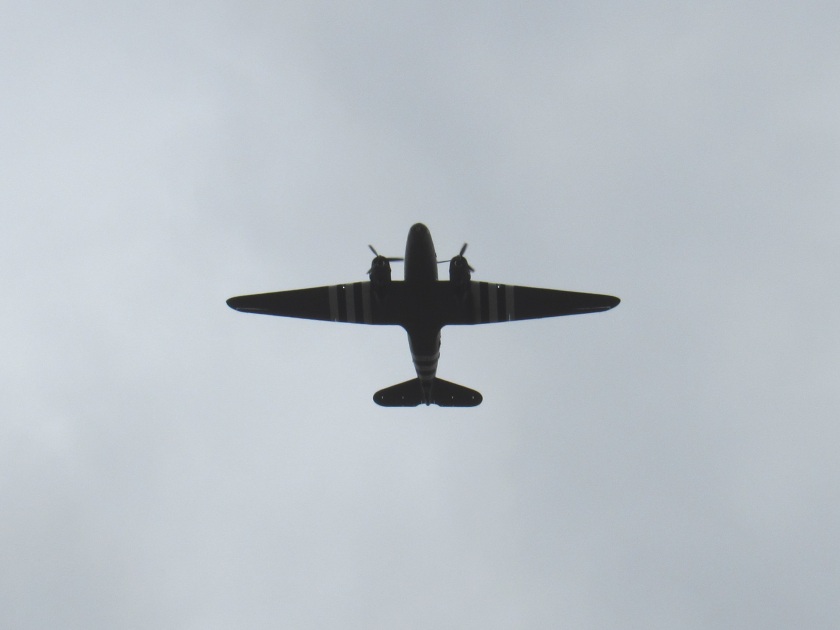 The Dakota was followed by the RAF’s flightworthy Avro Lancaster escorted by three Supermarine Spitfires and two Hawker Hurricanes. These legendary aircraft need no introduction from me! 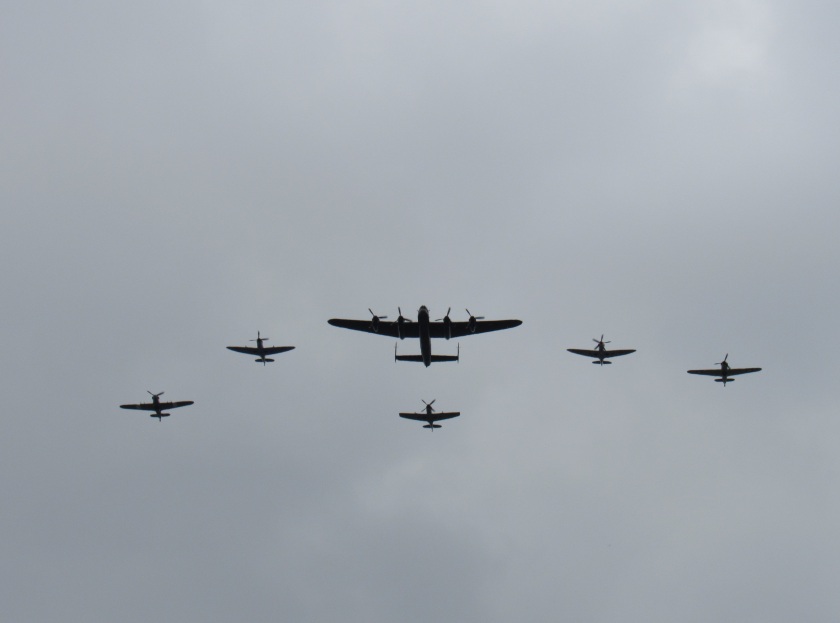 Next up was a formation of three 120TP Prefects. Built by the German manufacturer Grob, the 120TP is a two seat low wing turboprop monoplane with a composite airframe. It first flew in 2010. They are used as trainers by the RAF.

The Prefects were followed by nine Short Tucano T1 trainers flying in a tight diamond formation. The Tucano is built by Short Bros of Belfast under licence from Embraer of Brazil. It first flew in 1986 and production ended a decade later. They are due to be retired next year.

The Shadow R1 is derived from the Beechcroft Super Air King, a civilian utility aircraft that first flew in 1972. The Shadow R1 serves as an Intelligence, surveillance, target acquisition, and reconnaissance (ISTAR) aircraft.

The Shadow R1 was followed by the first of the ‘big beasts’: a pair of Lockheed Martin C-130 Hercules four engine turboprop transports. The ‘Herc’ first flew in 1954 and remains in production to this day, almost six and a half decades later. It is noted for its ability to operate from rough airstrips yet carry a substantial payload of 33 tonnes. The RAF operates the upgraded C-130J version, which entered service in 1996.

The ‘Hercs’ were followed by the mighty Airbus A400M Atlas. The turboprop-powered Atlas first flew in 2009. It can carry a greater payload than the Hercules (37 tonnes) and shares its ability to operate from rough landing strips. The Atlas entered service with the RAF in 2014. 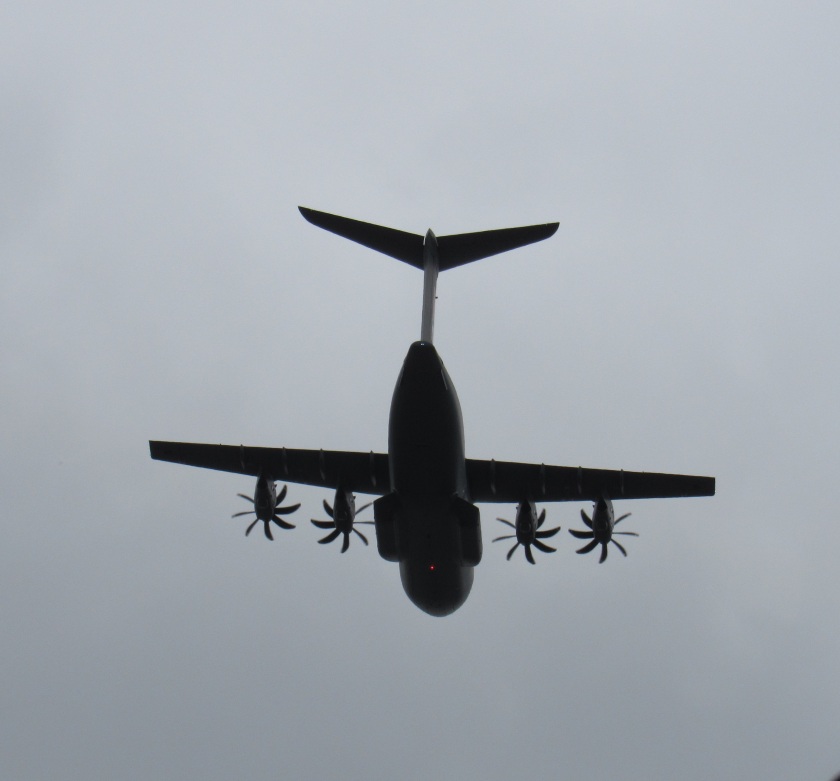 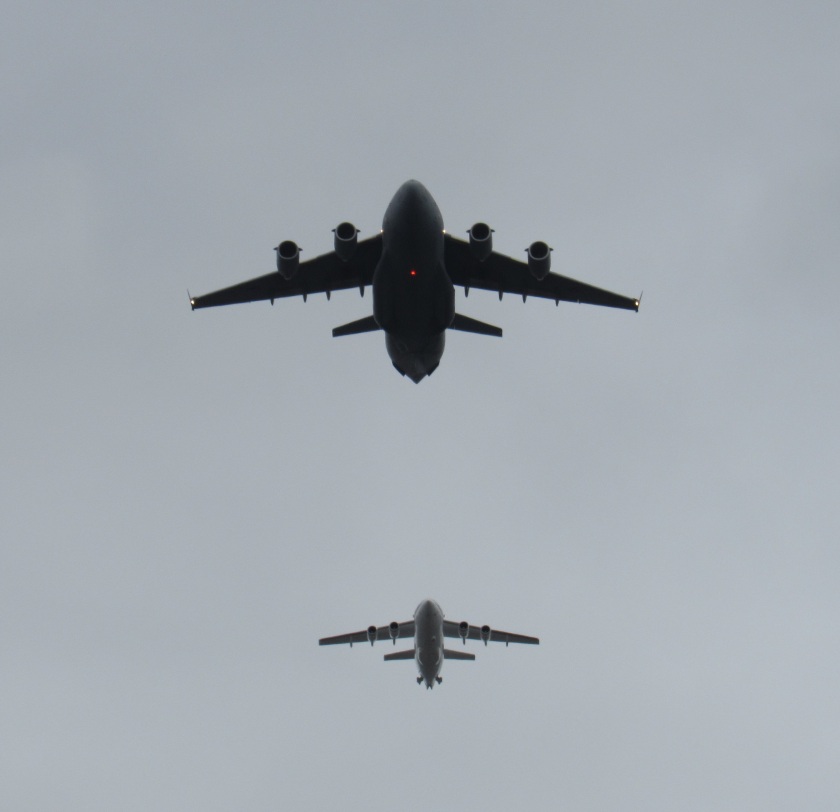 The Raytheon Sentinel R1 is an ISTAR aircraft based on the Bombardier Global Express business jet.

The Airbus A330 Voyager tanker is based on the A330 airliner. In addition to its inflight refuelling role, it can carry 291 personnel and freight.

The Boeing RC-135 ‘Rivet Joint’ is a large ISAR aircraft based on the venerable C-135 Stratolifter transport.

Distinguished by its large rotating radar dome, the E-3 Sentry is an airborne early warning of AWACS aircraft. The airframe is based on the Boeing 707 airliner. The Sentry was produced between 1977 and 1992. 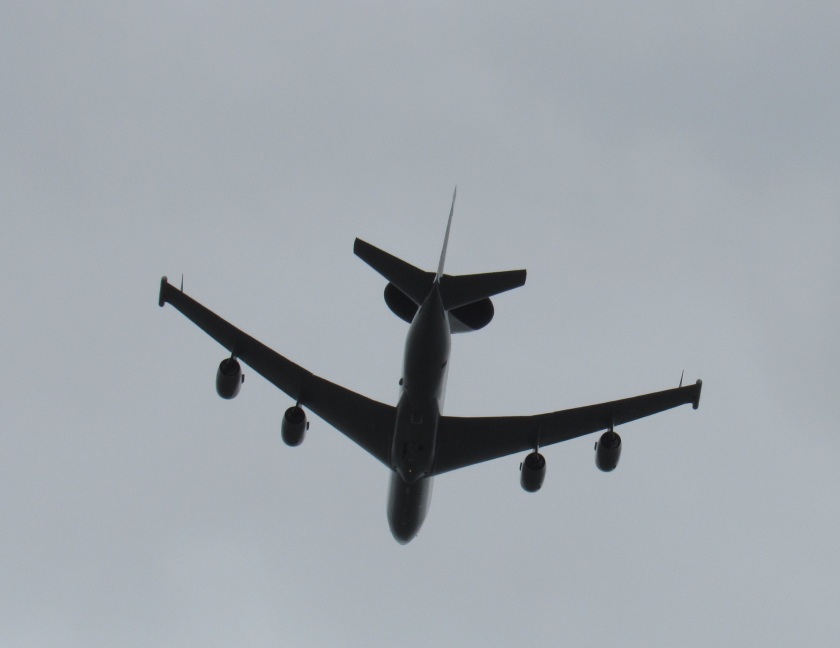 Nine BAE Hawk T1 trainers flying in arrowhead formation. The T1 is an advanced jet trainer introduced in 1976 to replace the Folland Gnat, which it closely resembles. It has now been superseded as a trainer by T2, but it continues to be used by the Red Arrows and is expected to remain in service until 2030.

The Hawk T1 formation was followed by nine Hawk T2s, this time flying in diamond formation. The Hawk T2 entered service in 2009.

The Panavia Tornado is a multi-role combat aircraft that first flew in 1974 and remained in production until 1998. The GR4 variant is a ground attack aircraft capable of engaging any target on the modern battlefield.

Making its first public appearance in Britain, the Lockheed Martin F35 Lightning II is a fifth generation multi-role stealth fighter. The type first flew in 2006. The British armed services are acquiring the F35B short take-off and vertical landing (STOVL) variant, which will eventually be deployed on the aircraft carriers HMS Queen Elizabeth and HMS Prince of Wales as well as serving with the RAF.

The three Lightning IIs were followed by 22 Typhoon fighters, spelling out the number ‘100’. It took months of planning to fly in this formation, intended as a surprise to the huge audience. The Typhoon FGR Mk4 is an extremely capable fourth generation multi-role combat aircraft which first flew in 1994 and entered service in 2003. To date, 623 aircraft have been built. 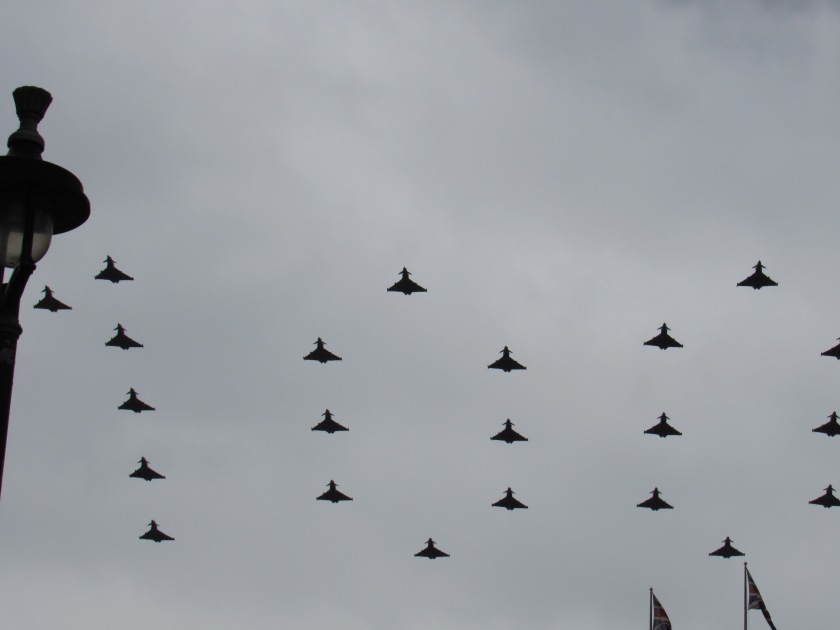 Only the inestimable Red Arrows could follow the spectacular Typhoons, and their appearance, with trademark red, white, and blue smoke, drew a huge cheer from the crowd. Officially known as the Royal Air Force Aerobatic Team, the Red Arrows have been delighting the public with their aerobatic displays since 1964. To date, they have performed over 4,700 displays in 56 countries. 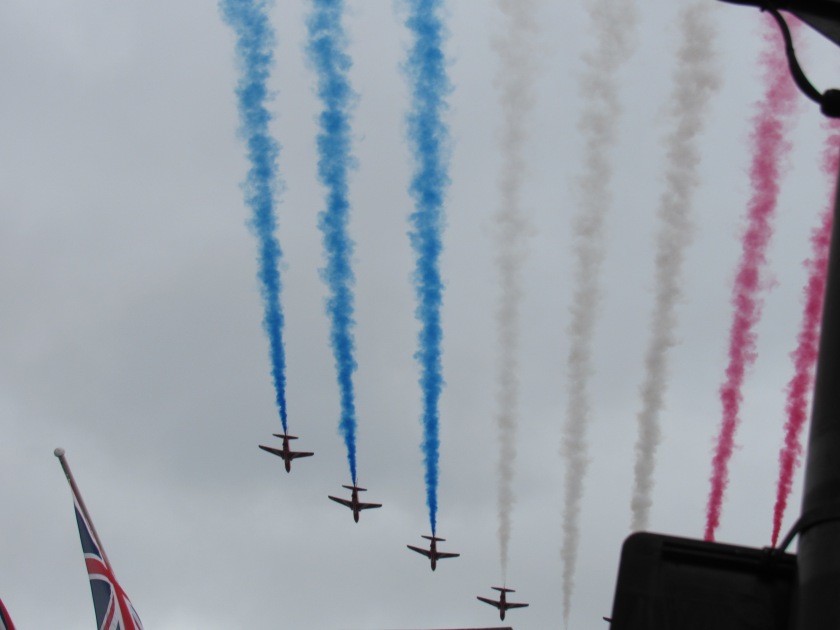 It was the summer of 1969 and there was a mood of excitement at my school. Somebody had heard that Concorde would be making a test flight in the area later that day. The British prototype Concorde, G-BSST (002) had recently made its maiden flight at Filton, Bristol, a few weeks after its French counterpart F-WTSS (001). I didn’t give it too much thought: even if Concorde did overfly the school, we’d probably be in lessons. But I was wrong – it was the lunch hour, we were in the playground, and Concorde came swooping over the school.

Concorde had been in the news for as long as I could remember; I’d seen innumerable artist’s impressions of it in flight; like millions of others, I’d watched the live coverage of 001’s maiden flight from Toulouse – but now here it was for real, flying over the school.

I couldn’t wait to get home and tell my father I’d seen Concorde!

In adult life, living in London, Concorde became a familiar sight after it entered commercial service in 1976. It was always an attention-getter, in part because it was far louder than anything else flying, but in the main because it was utterly unlike anything else you were likely to see in the skies above London.

Almost three and a half decades after the British prototype made its flight over my school, most of my office in Fleet Street turned out to watch Concorde’s grand farewell as three aircraft flew in low over the Thames on their way to Heathrow and into retirement. It is the only occasion that I ever saw more than one Concorde at the same time.

I never got to fly Concorde – even the chartered trips around the Bay of Biscay seemed too expensive to justify, though I now regret not having taken the opportunity.

Fifteen years after its retirement, Concorde remains one of if not the most evocative name in aviation history. Almost half a century after its maiden flight, it remains the only passenger airliner to have flown the Atlantic in under three hours.

Only twenty Concordes were ever built, including two prototypes and four pre-production and development aircraft. Fourteen aircraft entered commercial service, seven each with British Airways and Air France. Further orders failed to materialise due to enormous cost overruns, and the restriction of supersonic flight to ocean crossings.

After the British and French governments wrote off the cost, Concorde was nevertheless profitable right up until the beginning of the twenty-first century. The end came with the Air France Flight 4590 disaster on 25 July 2000, which led to Concorde being grounded while safety modifications were carried out. This was followed almost immediately by the downturn in air travel following 9/11. Accordingly, BA and Air France decided to retire Concorde.

The British Airways Concordes retired on 24 October 2003. G-BOAG flew from New York while G-BOAF made a round trip over the Bay of Biscay, carrying VIP guests including former Concorde pilots, and G-BOAE made a round trip to Edinburgh. The three aircraft then circled over London, having received special permission to fly at low altitude. Witnessed by tens of thousands (including myself as noted above), they flew along the Thames before landing in sequence at Heathrow.

The last flight of any Concorde took place on 26 November 2003. Fittingly, it involved G-BOAF (216), which was the last Concorde to be built. The aircraft flew from Heathrow, going supersonic over the Bay of Biscay and performing a lap of honour over Bristol before landing at Filton, where it now forms the centrepiece of the Aerospace Bristol Museum.

There has long been talk of returning Concorde to flight, but to date nothing has come of any proposal. Sadly, the practical difficulties of getting even one of these iconic aircraft back in the air appear to be all but insurmountable. 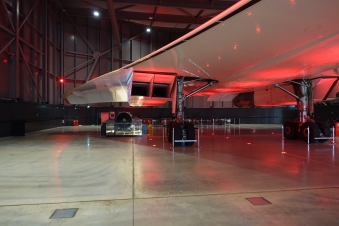 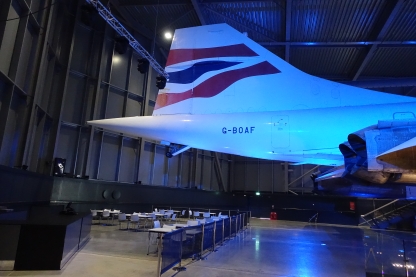 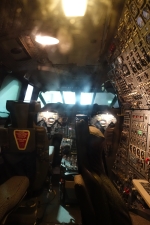 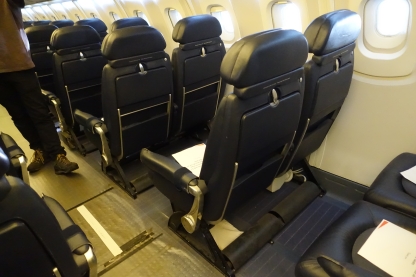 Views of the cockpit and cramped interior. Note the tiny windows. On the other hand, the seats were upholstered with the finest leather. 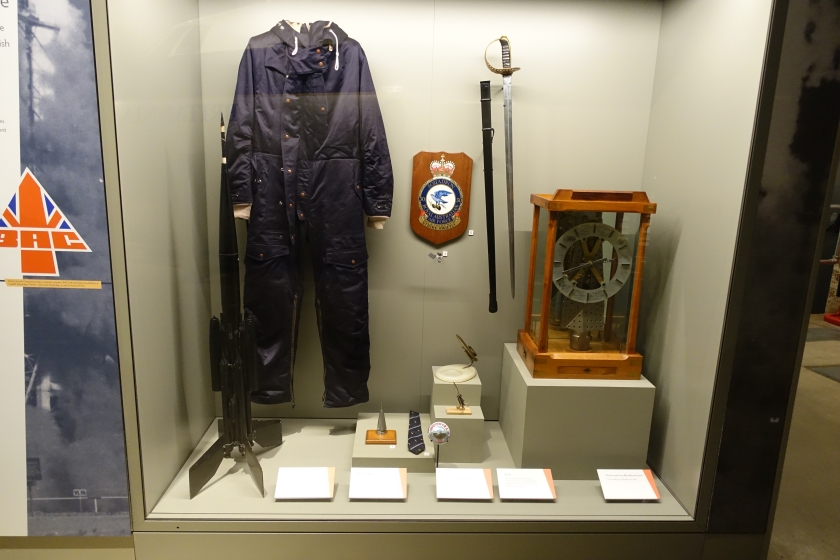 Flight suit of test pilot Brian Trubshaw, who piloted the British prototype G-BSST (002) on its maiden flight on 9 April 1969.