An updated version of this post is now available as a Kindle ebook on Amazon.

Stunning views from the summit of Box Hill, part of the Surrey Hills Area of Outstanding Natural Beauty. 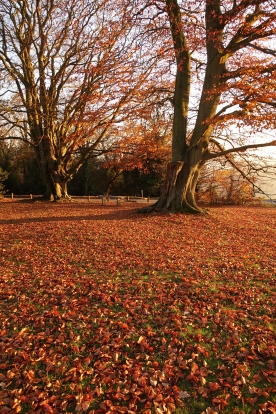 If you were a boy in the second half of the 1960s, there is a good chance that you will remember TV 21, the boy’s magazine that ran comic strips based on Gerry Anderson’s Fireball XL 5, Stingray, and Thunderbirds, presented as if they were current stories in a 2060s newspaper.

Much less well known is Joe 90: Top Secret. TV 21’s ‘newspaper of the future’ format was extremely successful at first, but as the 1960s neared an end, sales began to fall. The initial readership had aged into their teens, and potential new readers were now too young to have watched the earlier Anderson shows. Attempts to reboot the ‘Anderverse’ with Captain Scarlet and the Mysterons and Zero X (the latter was a spaceship that featured in both Thunderbirds and Captain Scarlet) failed to halt the decline.

So, in January 1969, Joe 90: Top Secret was launched as a companion to TV 21. Like its parent publication, it ran comic strips based on science fiction-themed TV shows, although this time there was no attempt to link them into a shared universe. In addition to the eponymous Joe 90, the magazine featured Irvin Allen’s new series Land of the Giants, the British spy series The Champions, and an unfamiliar strip featuring the adventures of Captain Kurt and the crew of the Universe Star Ship Enterprise. Yes, this was my introduction to Star Trek, six months before it made its first appearance on British television.

Star Trek had been running in the States since 1966, and it was now well into its third and final season, but it did not debut on BBC television until 12 July 1969 – just over a week before Neil Armstrong’s ‘giant leap for mankind’. Consequently, most UK readers of Joe 90 had never heard of the show. Two decades later, Star Trek: The Next Generation and its spinoffs would also take several years to make their way across the Atlantic, but by this time – even before the internet – Star Trek was a global phenomenon and the tabloids were making execrable jokes about “to baldly go” in reference to Patrick Stewart’s lack of hair long before Captain Picard and the Enterprise-D first featured on BBC television in September 1990.

Writer Angus Allan doesn’t seem to have had much Star Trek source material to go on at first, but his inventive story lines, and the artwork by artists including the legendary Mike Noble, more than made up for this.

The Universe Star Ship Enterprise left Earth’s atmosphere to embark on a five year deep space exploration. Massive in proportion and manned by thousands, the Enterprise’s mission is to make peaceful contact with any form of life in the universe.

In addition to ‘Captain Kurt’, the bridge crew included ‘the strange Mr Spock’, helmsman Sulu, and navigator Bailey. The latter appeared in only one episode of the TV series: the first-season episode The Corbomite Manuever. It seems probable that that excerpts from this episode were the only source material initially available to the Joe 90 artists and storywriters.

In the first story arc, hostile robots take over the Enterprise and land the starship on their planet. Not until Voyager would TV viewers see a Federation starship make a soft-landing on a planet (albeit the movie Generations featured the saucer section of the Enterprise-D making a crash-landing). Other oddities included shuttles that resembled miniature versions of Thunderbird 2 and ‘repair waggons’ equipped with grapples. The Enterprise was armed with turret-mounted lasers rather than the more familiar phasers and photon torpedoes.

Gradually, the UK Star Trek strip caught up with the TV series. The error with Kirk was soon corrected; Dr Mc Coy joined the crew for the second strip, and Scotty, Uhura, and Chekov soon followed. The transporter (albeit referred to as a teleport) appeared in the third strip and the sixth strip (which coincided with the belated appearance of Star Trek on British television) saw the Enterprise equipped with phasers and more conventional Galileo-class shuttles (albeit misspelt). However, readers had to wait until early 1970 before the Klingons and the Romulans made an appearance.

Joe 90 survived for 38 issues before it was merged into its parent publication TV 21, which ran for a while as TV 21 & Joe 90 before reverting to its original title. Star Trek survived these changes, and a later merger with Valiant. It ran until the end of 1973, a total of 257 episodes before it was finally dropped.

This offbeat incarnation of Star Trek was then largely forgotten for forty years. The stories were never published in the United States. Eventually, in 2016, thanks to the endeavours of enthusiast Rich Hanley, they were brought back into print. Between March of that year and September 2017, the entire series was published in a three-volume collection.