It’s not the Nou Camp or the Bernabeu – this is Victoria Park, the home of Hartlepool United FC since 1886. 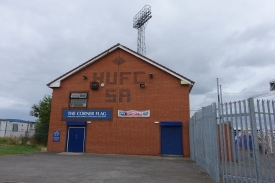 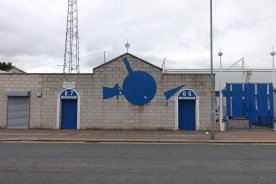 Founded in 1908 as Hartlepools United, the club originally represented the towns of West Hartlepool and Old Hartlepool. The name was changed to simply Hartlepool FC in 1967 when the two Hartlepools were merged into a single county borough; the ‘United’ was re-instated in 1977.

By whatever name, it is fair to say that Hartlepool United have never set the footballing world alight. The club were founder members of League Division Three North in 1921 and to this day have never competed above the third tier of the English league system. During the era when the Football League was virtually a closed shop, the ‘Monkey Hangers’ set an unwanted record of having to apply for re-election fourteen times. Prior to 1986-87, there was no automatic promotion or relegation to or from the Football League, but the bottom four clubs had to seek re-election. Only occasionally would a member club be voted out in favour of a non-league hopeful.

Hartlepool’s major claim to fame is to have been the first club managed by the legendary Brian Clough. Another manager who enjoyed success at Victoria Park was the former Spurs and England defender Cyril Knowles, whose life was cut tragically short by cancer at the age of 47, and who now has a stand named for him.

As recently as 2013, Hartlepool United were playing League One football, but relegation that season ended their longest-ever period (six years) out of the bottom tier. Unfortunately, the decline continued and a second-from-bottom League Two finish in 2016-17 finally ended the club’s so often charmed life in the Football League.