HM Prison Shrewsbury was built in 1877, although there has been a jail on the site since 1793. It held convicts of both sexes until 1922, but thereafter was a men’s prison until its closure in March 2013. In its later days, it was one of the most overcrowded prisons in the UK. The prison is located on Howard Street, adjacent to Shrewsbury railway station. It is often referred to as the Dana, after a road that runs past the main entrance. Howard Street is named for the penal reformer John Howard, the bust of whom is mounted above the main entrance. After the last prisoners left, the jail was opened to the public as a visitor attraction. It will remain so until the site is redeveloped next year.

Main entrance to the jail, featuring the bust of John Howard. 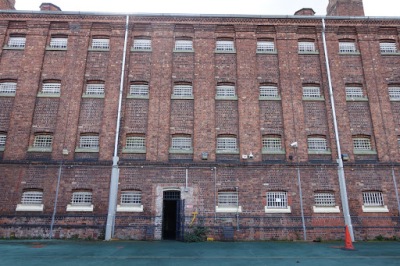 View of the barred cells from the exercise yard.

Inside one of the cells.

A Wing seen from the first floor.