The Birmingham Central Library opened in 1974 and was for a time the largest non-national library in Europe. Designed by architect John Madin in the brutalist style, the library won praise for its inverted ziggurat form, but it did not meet with the approval of HRH Prince Charles, who described it as looking like “a place where books are incinerated, not kept”.

The library was part of a masterplan for the newly created Paradise Circus site, which also included a School of Music, a Drama Centre, an Athletic Institute, offices, shops, public house, a car park with 500 spaces, and a bus interchange. These were to be connected by high level walkways. In the event, only the School of Music and Yardbird pub were ever built, and the walkways were never completed. Spending cuts led to the Council selling off land surrounding the library, ending hope of the site being occupied by a publicly-owned civic complex.

The library’s atrium was enclosed with a glass roof and screens around 1990, and the space below was named Paradise Forum. It was intended that this become an alfresco eating and entertainment area, but it was eventually leased to property companies who in turn sublet the units to shops and fast food outlets.

In the late 1990s, Paradise Circus was sold to property developers, and the Council began to investigate relocating the library, After a number of proposals had fallen through, work finally started in 2010 on a new Library of Birmingham, located next to the Rep Theatre. The Central Library closed at the end of June 2013.

The building could have been refurbished and put to other uses, but proposals came to nothing. The Council thwarted all attempts to have it listed, and demolition commenced in August 2015.

The library in September 2009 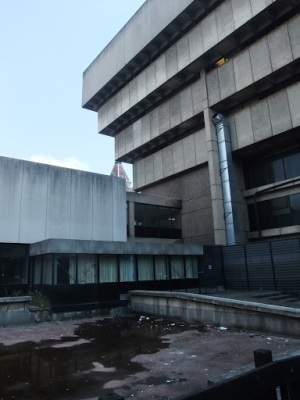 Above: August 2013, showing visible signs of dilapidation.
Below: June 2016, demolition in progress. 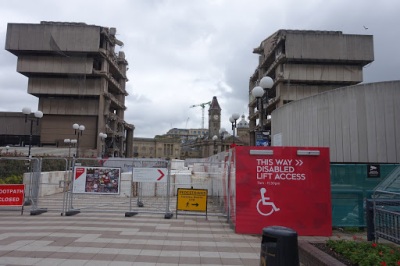 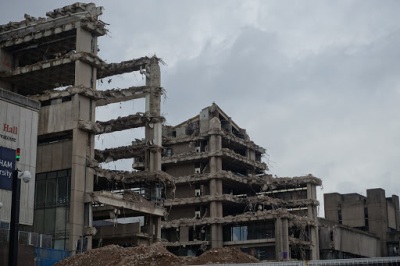 Earliest Homo floresiensis fossils found at Mata Menge
The diminutive Homo floresiensis hominins, popularly referred to as the Flores hobbits, are thought to be descended from normally-sized hominins who underwent a phenomenon known as ‘insular dwarfism’ after they reached Flores. Food shortages combined with an absence of dangerous predators meant that smaller individuals, with lower calorific requirements, were at an advantage and over many generations the entire population ‘downsized’.
Up until now, the evidence for when this process begun have been tentative. The hominins originally found at the western Flores cave site at Liang Bua, though older than once thought, are still no more than 100,000 years old. It has been suggested that stone tools from the sites of Mata Menge and Wolo Sege in central Flores show technological continuity with artefacts associated with the original Homo floresiensis finds at limestone cave of Liang Bua in western Flores. The Mata Menge artefacts are 880,000 years old and those from Wolo Sege are at least at least a million years old, suggesting that hominins were on Flores by then, although these artefacts cannot tell us anything about the size of their makers (Brumm, et al., 2006; Brumm, et al., 2010)
However, Mata Menge has now yielded actual hominin remains, which have been dated to 700,000 years ago by argon-argon and fission track methods. (Brumm, et al., 2016) They comprise an adult hominin fragmentary lower jawbone and six teeth. The fossils have been described as ‘Homo floresiensis-like’ and the jawbone and a molar teeth are even smaller than those of their Liang Bua counterparts. Thus Flores hominins were already downsized by this time. (Van den Bergh, et al., 2016)
References:
Brumm, A. et al., Age and context of the oldest known hominin fossils from Flores. Nature 534, 249-254 (2016).
Van den Bergh, G. et al., Homo floresiensis-like fossils from the early Middle Pleistocene of Flores. Nature 534, 245-248 (2016).
Brumm, A. et al., Early stone technology on Flores and its implications for Homo floresiensis. Nature441, 624-628 (2006).
Brumm, A. et al., Hominins on Flores, Indonesia, by one million years ago. Nature 464, 748-753 (2010).

Reginald Warneford was a pilot in the Royal Navy Air Service, having transferred from the Army soon after joining up. By May 1915 he was on active duty with 1 Wing at Veurne on the Belgian coast, which the Germans never managed to occupy. He rapidly made a name for himself with attacks upon German troops and aircraft, and was assigned his own aircraft – a French-built Morane-Saulnier Type L monoplane. On 7 June near Ghent he encountered the German Zeppelin LZ 37. He engaged the heavily-armed airship, managed to climb above it, and attacked it with bombs. His last bomb set the airship on fire and brought it down, but the explosion damaged his own aircraft. Forced to land behind enemy lines, Warneford managed to effect repairs and returned safely to base.

For this not inconsiderable act of bravery and cool-headed thinking,Warneford was awarded both the Victoria Cross and the French Ordre national de la Légion d’honneur, but sadly he was dead just ten days later. On 17 June, after receiving the Légion d’honneur from the French Army Commander in Chief, Warneford travelled to Buc in order to fly an aircraft for delivery to the RNAS at Veurne. He made a short test flight alone, then a second flight with American journalist Henry Beach Newman as a passenger.The aircraft broke up in flight, and both men were fatally injured: Newman died at the scene and Warneford on his way to hospital.