Seventy-three thousand years ago, an elderly man sat in the mouth of a limestone cave, intently working on a small rectangular piece of reddish-brown ochre. From time to time, he paused in his work and stared out towards the sea that lay a kilometre away. First he scraped and ground the piece flat on two sides and then, with the aid of a sharp stone tool, he engraved a cross-hatched geometrical design upon one of the newly-ground facets. It was the second such piece he had made, but there would be no others because a few weeks later he fell ill with a respiratory disease. A younger man would probably have recovered, but at 48 he was old and worn out. Within a few days, he was dead.

When his companions eventually decided it was time to move on from the cave that had been their home for the last six months, they took most of their few possessions with them. But the old man’s ochres were forgotten and left behind. Within a few months, the ochres and all other traces of the brief occupation were buried beneath wind-blown sand, and they would not see the light of day again for very long time indeed…. 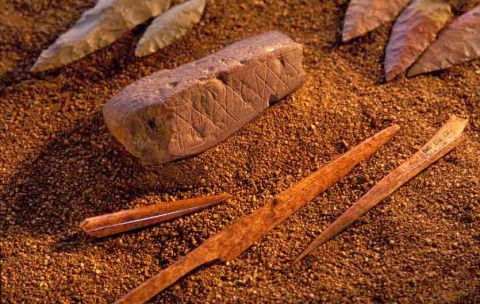 In actuality, we have no idea who engraved the two pieces of ochre found at Blombos Cave in 2002, and although it is likely that they were both the work of the same individual we cannot be certain. The cave is located on the southern coast of South Africa in a limestone cliff 35 m (115 ft.) above sea level, 100 m (330 ft.) from the coast, though when occupied the coastline was further away. Discovered by archaeologist Christopher Henshilwood, it is one of the most extensively researched sites from the African Middle Stone Age.

Henshilwood has been familiar with the site since his childhood, since it is located on land owned by his grandfather. As a boy, he found a number of artefacts, dating from comparatively recent prehistoric times. In 1991, he returned there as a PhD student, hoping to discover similar artefacts. Instead, he found a number of bone tools and stone points that dated from a far earlier period, over 70,000 years ago.

After completing his PhD at the University of Cambridge, Henshilwood obtained funding to commence excavations at Blombos Cave, and he continues to lead work at the site to this day. Three Middle Stone Age phases of occupation have been identified. These are known as M1 (73,000 years ago), M2 (subdivided between an upper phase 77,000 years ago and a lower phase 80,000 years ago) and M3 (125,000 years ago). Each phase contains a number of occupation layers, but they are quite shallow indicating that the cave was only occupied sporadically and for relatively short periods of time.

However, while the cave was in use its occupants enjoyed a varied diet of large fish, shellfish, seals, dolphins and land mammals. Mole rats were often roasted over a fire and eaten; these large burrowing rodents are considered a delicacy by local farm workers to this day. The later occupations of the cave are associated with the Stillbay tool industry, which has first identified in the 1920s and named for the village of Still Bay, which lies a short distance from Blombos Cave.

The Stillbay was one of the cutting-edge industries of the African Middle Stone Age, and was noted for its finely-worked leaf-shaped stone points, which were made from high-quality materials including chert, quartzite and silcrete. The Stillbay people also made and used bone awls and projectile points, similar to those seen in ethnographic collections. Such implements are far more difficult to manufacture than stone tools. Other examples of Stillbay high tech included compound adhesives for hafting stone points to spears, and the use of heat treatment and pressure flaking for finishing stone artefacts. The Stillbay industry was widespread, and not confined to the region around Blombos Cave and Still Bay. Curiously, however, it was short-lived and persisted for less than a thousand years, before being replaced by seemingly less advanced industries of the type more typical of the African Middle Stone Age.

Perhaps the most important discovery at Blombos Cave has been the engraved ochres. Ochres are a range of minerals containing iron oxide that exist in a range of colours including red, yellow, brown and purple. They have long been used as pigments and their first known use was at least 266,000 years ago at Twin Rivers, a complex of caves in southern Zambia – before the appearance of modern humans. It is possible that the Twin Rivers ochre was used for utilitarian purposes, such as for making adhesives, for medicinal purposes, hide processing, or even as Stone Age sunblock. However, the consistent selection of brightly-coloured and often hard to grind materials suggests an ornamental explanation such as for body painting. In South Africa, red ochre appears in the archaeological record from at least 160,000 years ago, and invariably material with the reddest hues seems to have been preferred – again suggesting a non-utilitarian purpose.

Several thousand pieces of ochre have been found at Blombos Cave, and in 2002, Henshilwood reported the two pieces of engraved ochre from the 73,000 year old M1 phase, which were catalogued as AA 8937 and AA 8938. Both had been engraved with cross-hatched patterns, using a sharp stone tool to make wide grooves upon surfaces previously prepared by grinding. On AA 8938, in addition to cross-hatching, the pattern is bounded top and bottom by parallel lines, with a third parallel line running through the middle. The fact that the two pieces are so similar suggests a deliberate intent, rather somebody absent-mindedly scratching away at the pieces with a sharp object. Somebody who knew just what they were doing must have sat down and engraved the two pieces. Other engraved ochres were later identified, although they were less spectacular than AA 8937 and AA 8938. They came from all three phases of the site, and some were over 100,000 years old.

The Blombos Cave ochres are central to the debate about the emergence of modern human behaviour, which anthropologists define as the ability of humans to use symbols to organise their thoughts and actions. Symbols are anything that refers to an object or an idea, and can take the form of sounds, images or objects. They may refer directly to an object or idea, for example a representational image; or they may be totally abstract, such as spoken or written words. Thus for example a drawing of a cat, the sound ‘cat’ or the written letters ‘c-a-t’ may all be used to refer to a cat. We use symbols all the time – whenever we read a newspaper, check the time, consult a map or admire a painting or sculpture. All of these activities involve symbolic behaviour: human society could not function without it. Modern syntactical language is a system of communication that uses symbols in the form of spoken and (in the last six thousand years) written words to enable an effectively infinite range of meanings to be conveyed.

The earliest human species such as Homo habilis and Homo erectus are thought to have had only a very limited ability to use symbols, but it is hotly debated when the fully symbolic behaviour of present-day people emerged. Was it shared with some archaic humans – in particular the Neanderthals – or was it limited to Homo sapiens, emerging at the same time as anatomical modernity around 200,000 years ago? Some go further and argue that even Homo sapiens lacked behavioural modernity until about 40,000 to 50,000 years ago. Proponents of this view believe that a behavioural ‘Great Leap Forward’ occurred at this time as a result of a favourable genetic mutation that rewired the brain and enabled syntactical language and other trappings of behavioural modernity to develop.

They base this view around the observation that artefacts that are unequivocally the products of modern thought processes – cave paintings, figurines and carvings – do not appear in the archaeological record until that time. But Henshilwood argues that the engraved geometrical patterns on the ochres imply the existence of modern syntactical language, and that modern human behaviour must therefore have emerged much earlier.

Henshilwood dismisses other possible explanations for the marks on the ochres. For example, he claims that they could not the by-product of testing for the quality of powder that could be obtained from the ochres, as only a few lines would be required for this purpose. He also believes that the marks are unlikely to have been the result of absent-minded doodling because great care was taken in completing the patterns and ensuring the incisions matched up. Furthermore, engraving lines on hard pieces of ochre requires full concentration in order to apply the right pressure and keep the depth of incision constant. He believes that not only were the marks on the ochres made with deliberate intent, but recurring motifs on ochres found in all three of the Middle Stone Age phases are evidence of a tradition of engraved geometric patterns that began more than 100,000 years ago and persisted for tens of millennia.

The most obvious question is what was the significance of the geometric patterns? Henshilwood notes that the Christian cross would appear equally abstract to somebody unfamiliar with religious iconography. It is possible that the patterns meant something quite specific to the people who made them, though just what we simply don’t know and probably never will know.

Another question is if humans were able to produce abstract art over 100,000 years ago, why was figurative art not seen until so much later? One possibility is that humans were still not behaviourally fully modern and were not at this stage able to make figurative images, though Henshilwood rejects this possibility. He notes that there are many cultures that do not make figurative art, and many others that do so using perishable materials that would not survive for tens of thousands of years.

Henshilwood believes the fact that the ochre engravings were intentionally created and depict distinctive geometrical patterns is enough to demonstrate that they are the product of a society of behaviourally-modern humans. Given the evidence for technological sophistication during the Stillbay period, we should not find this unduly surprising.

One thought on “The engraved ochres of Blombos Cave”