One of the first skyscrapers in London, Centre Point was built as a speculative office development by property developer Harry Hyams. Designed by Richard Seifert and constructed between 1963 and 1966, it is now a Grade II listed building.

Centre Point became a cause célèbre with the political Left throughout the 1970s as Hyams left the building empty for many years, wanting to let it out on a long lease to a single tenant. With property prices rising, he could afford to wait. The building was eventually let out to the CBI in 1980. 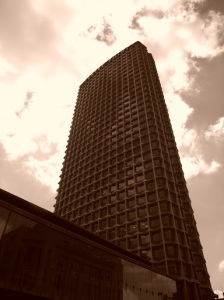