Constructed between 1974 and 1982, the Thames Flood Barrier at Woolwich came into use the following year. The barrier is built across a 572 yard wide stretch of the river and divides it into four 200ft and two 100ft navigable spans, and four smaller non-navigable channels between nine concrete piers and two abutments. The structure was designed by Rendel, Palmer and Tritton and built by a consortium comprising Costain, Hollandsche Beton Maatschappij and Tarmac Construction at a cost of £534m. An additional £100m was spent on strengthening river defences for eleven miles down river.

Initially it was only raised on average twice a year, but since 1990 this has increased to an average of four times a year. The structure was never intended to cater for the effects of global warming, and by 2005 it was looking possible that a larger barrier might be required to protect London from flooding. 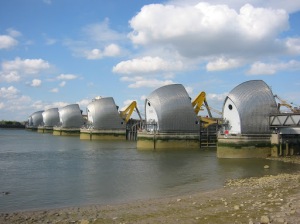 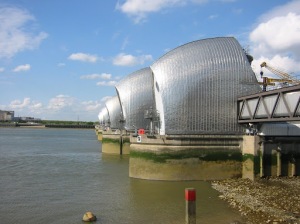 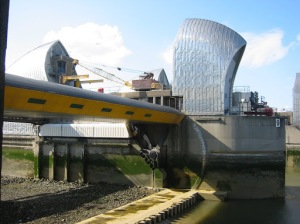