West Kennet Long Barrow is part of the Avebury complex of Neolithic monuments and is located on a chalk ridge 1 ½ miles south of the village (map reference SU105677).

It comprises a trapezoidal mound, 330ft (100m) long, which has a core of sarsen boulders topped out with chalk rubble from two ditches running parallel to the mound. At the eastern end of the mound are two facing pairs of burial chambers opening off from a central passage, which is terminated by a fifth chamber. At the entrance there is a 65ft (20m) semi-circular forecourt with a facade of large sarsen stones. Probably this area was used for ceremonies.

The monument was constructed around 3650 BC and is one of the largest barrows in Britain. It has been estimated that 15,700 man-hours went into its construction. Excavations carried out in 1859 and 1955-56 revealed the burials of 46 individuals of various ages. The barrow remained in use for around 1000 years, after which it was sealed up with massive flat sarcens being placed to block the entrance. The burial chambers were filled with chalk rubble. 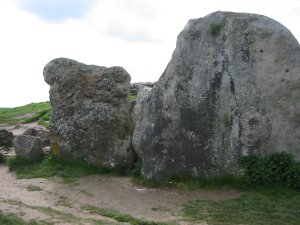