Wayland’s Smithy is a Neolithic burial chamber located near the village of Ashbury, Oxfordshire (map reference SU281854). It lies in a plantation of trees on the Ridgeway, not far from the Uffington White Horse and Uffington Castle.

It is named for Wayland (aka Weland, Volund or Volundr), the Saxon god of metalworking, who features in Old English and Norse mythology. Legend has it that a horse requiring a shoe may be left unattended at the site for a short while with a silver coin for payment. On return, the horse will be shod and the coin gone.

The remains of 14 bodies from the first period of construction were located during excavations in the 1960s. Previously, in 1919, the remains of seven adults and one child from the second phase were discovered. 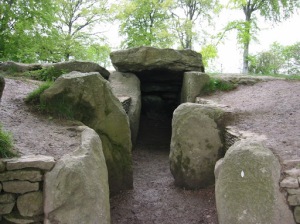 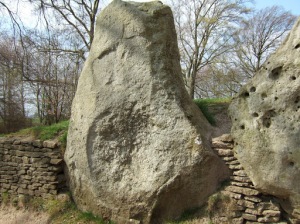