Modern humans are believed to have reached Australia from 40,000 to 50,000 years ago (e.g. Scarre, 2005; Wade, 2007) and possibly even earlier (e.g. Wells, 2002; Oppenheimer, 2003). There is little doubt that these first Australians possessed the capacity for art and were in all probability producing artwork at the same time as their European counterparts were adorning the Chauvet Cave in France, but the earliest known Aboriginal Australian rock art dates from 20,000-30,000 years ago (Scarre, 2005). It is possible that works predating these were located in coastal regions that were inundated when sea-levels rose at the end of the last Ice Age, as indeed happened in Europe where some cave art, such as that at Cosquer Cave near Marseille, can now only be accessed by scuba divers.

Today, Aboriginal Australian art is widely admired and, inevitably, it has featured periodically on Australian coinage. The Royal Australian Mint in Canberra is one of two mints operating in Australia and some of its numismatic offerings are produced in direct competition to those from its older counterpart, the Perth Mint. One of the most appealing coins it has produced is the Kangaroo, a one ounce silver bullion coin with a face value of Aus $1, featuring a changing design based on the marsupial mammal that has become virtually synonymous with Australia. Different artists are featured each year, but the most vibrant designs so far seen were those of the mini-series by Aboriginal Australian artists that ran between 2001 and 2003.

The 2001 design was by Jeanette Timberly, of the Bidjigal Tribe. She was born in La Perouse, NSW.

The 2002 design was by Mark Nodea of the Gija Tribe in Eastern Kimberley, WA. He was born in Derby, WA in 1968. He currently resides in Kununurra and is former Chairperson of the Warmun Art Centre. Mark is a Traditional ochre artist but he works in other media and is also noted for his charcoal sketches and figurative acrylic works. 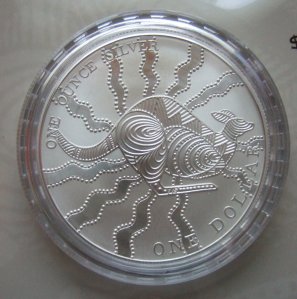 The 2003 design was by Ray Thomas of the Gunnai people of Victoria. He was born in Melbourne in 1960. See his personal website. 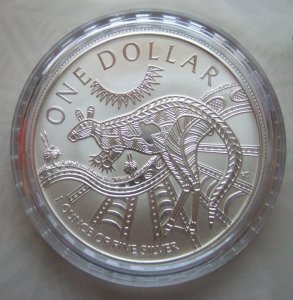