This US-made Waltham pocket watch was presented to my grandfather John Glanville Seddon for his services in World War I.

The inscription reads “Presented to Cllr. J.G. Seddon by the people of Farnworth in recognition of distinguished services rendered in the Great War 1914-1918”. My grandfather served as a councillor and became Mayor of Farnworth, Lancashire in 1957. 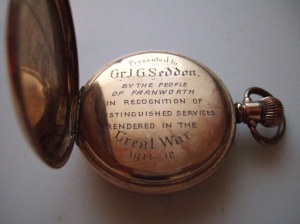 The back of the watch has the monogram JGS. 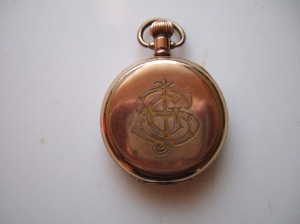 The watch utilises the then widely-used American Traveller movement. It is in full working order.

The watch passed to my father, screenwriter Jack Seddon, who as mentioned elsewhere on this blog, served in the RAF during World War II. It passed in turn to me after my father’s death in 2001.

I am posting this entry on Armistice Day, 2008, on the 90th anniversary of the ending of World War I.