Located near Alexanderplatz in what was then East Berlin and constructed between 1965 and 1969, the Berliner Fernsehturm (TV Tower) is easily visible across the whole of Berlin, as its instigator, Walter Ulbricht presumably intended. Ironically, the design was based on a similar structure in Stuttgart, in the capitalist west!

The tower is featured in English artist Tacita Dean’s 2001 work entitled ‘Fernsehturm’ and in 2006 the sphere was decorated as a football to mark Germany’s hosting of the World Cup, a tournament that the Germans uncharacteristically failed to win.

The tower is shown framed between two stairwells of the now-demolished Palast der Republik, another icon of the former Communist regime. 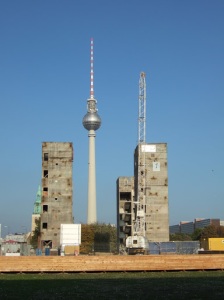