Standing 150 foot tall, this imposing structure is the Woodside Ventilation Station in Birkenhead, one of six such installations serving the Queensway Mersey Tunnel. These buildings are the work of Herbert James Rowse. This building and the similar structures in nearby Taylor Street and Sidney Street do show some similarities to the work of Sir Giles Gilbert Scott, most notably Bankside Power Station, London (now the Tate Modern). However, Sir Giles Gilbert Scott was not involved with the Mersey Tunnel project.

Another view, from the end of Morpeth Street.

Recalling sunrise over the Heel Stone at Stonhenge, or the Monolith from Kubrick’s 2001: A Space Odyssey, a view of the tower and the sun. 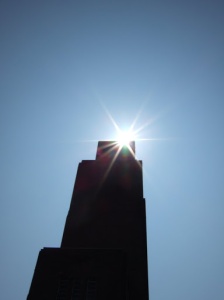 The view across the Mersey. Note the Anglican Cathedral – which was designed by Sir Giles Gilbert Scott. 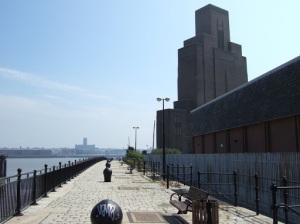 The fine brickwork lends the tower a monumental presence that transcends its utilitarian purpose.

The towers at Sidney Street and Taylor Street, though similar, are not identical. Sidney Street has two squat towers rather than a single large one, though they are connected to a single ventilation shaft.

I am most grateful to architect Reg Towner RIBA of Towner Associates for his recent input. Mr Towner has posted some very fine pictures of the Mersey Tunnel and its attendant infrastructure on Flickr: http://www.flickr.com/photos/townerassociates/sets/