The Crown Tavern in Clerkenwell, formerly the Crown and Anchor, is popular with after-work drinkers for its wide range of beers and is generally very busy in the evening. The pub’s popularity goes back a long way, and it rumoured that Lenin met Stalin for a few beers there while the two future Communist leaders were in London, shortly before the abortive 1905 revolution in Russia. 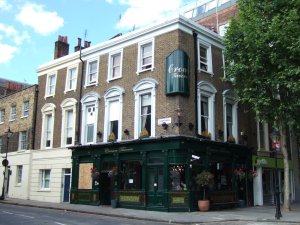 While working on the socialist periodical Iskra (“the Spark”), which was for a time published in Clerkenwell, Lenin stayed at 16 Percy Square, about a mile away.

The original building has since been demolished, but an English Heritage blue plaque marks the spot. Shouldn’t it have been a red plaque in this instance?